As expected, the Fed kept interest rates where they were at their quarterly meeting this week. The financial markets dipped modestly on the news but quickly rebounded to finish little changed on the day. Perhaps the bigger news is that the Fed is prepared to raise interest rates again if inflation rises, while the Fed dot plot report forecasted three more hikes in 2018 (take that with a grain of salt though as the dot plot is notoriously inaccurate). Janet Yellen did confirm that the Fed would also begin unwinding its $4.5 trillion balance sheet in October at the rate of $10 billion a month at first and rising to $50 billion a month by 2018. Using that timeline, the Fed will have unwound its entire position in about 8 years.

While the timing is unknown, interest rate hikes are coming and it’s time to begin planning accordingly. We have a fairly good idea of how certain sectors respond to rising interest rates. The bond market tends to drop as existing lower rate bonds look less attractive. The same goes for utilities whose high yields look great in a low rate environment but begin to look less so in the presence of lower risk alternatives. Fund giant Fidelity launched the Fidelity Dividend ETF for Rising Rates (FDRR) last year with the objective of investing in securities and sectors that are poised to perform best in a rising rate environment.

The Rising Rates ETF is unique in that it targets stocks that have a high correlation to the 10-year Treasury yield. On the surface, that sounds like just the type of fund you’d want to own if rates are heading up. But look a little deeper into the fund’s strategy and you’ll find this.

Only 10% of the fund’s factor weighting is actually related to its correlation to Treasury yields. Most of the fund’s criteria is based on dividend yield and strength, making it look more like a dividend growth ETF than a hedge against rising rates. 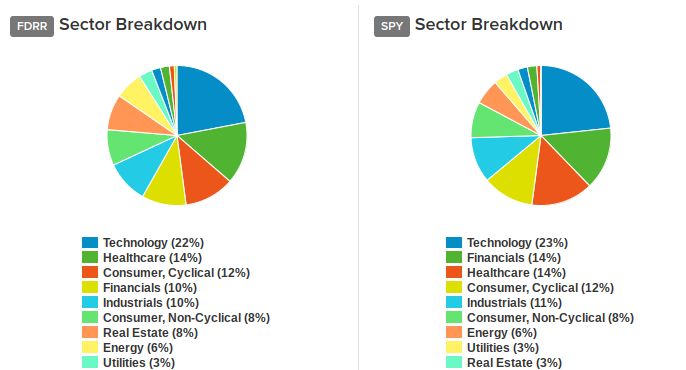 In reality, the fund looks more like a vanilla S&P 500 index fund. I’d expect that a fund hedging against rising rates would be heavier in financials and lighter in real estate and utilities. Instead, it’s the opposite that’s true. FDRR is actually lighter in financials and heavier in real estate, which seems counterintuitive if you’re preparing your portfolio for higher interest rates.

The fund more closely resembles high dividend ETFs such as the Vanguard High Dividend Yield ETF (VYM), the iShares Core High Dividend ETF (HDV) and the SPDR S&P Dividend ETF (SDY). Of the three, VYM is probably the best proxy as it focuses almost entirely on dividend yield and market cap in filling out the portfolio. The others layer on some quality screens, SDY targets the dividend aristocrat universe and HDV looks at company quality, making them less than pure dividend plays.

Positioning your portfolio for higher interest rates is a naturally defensive move, but it’s important that the fund’s strategy is aligned with that goal. FDRR is more dividend ETF than interest rate hedge and might not be the best fund for the job.

2018’s Top Performing ETF Is Risky As Heck, But It Looks Like A Winner