The markets continued their low volatility streak as the broader indices showed relatively little movement. Tech stocks once again led the way with the Nasdaq up around 0.3% but the Dow and S&P 500 down modestly. The financial markets drew little attention though as Washington and the Comey firing dominated the headlines. It’s important to remember that these events aren’t really going to impact the markets directly.

The retail sector got hammered this past week as I’ll discuss shortly. Earnings from Kohl’s (KSS), JCPenney (JCP), Macy’s (M) and Nordstrom (JWN) simply confirmed how troubled the sector is right now. Kohl’s performed the “best” by dropping “only” 9% but the others lost well into the double digits this week. 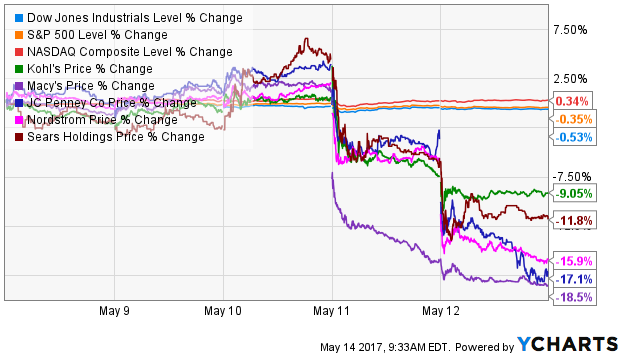 The economic calendar is relatively light and shouldn’t be expected to disrupt the current market calm. Housing starts data comes on Tuesday and initial jobless claims are on Thursday. Both are expected to confirm the continuation of recent trends and the overall current strength of the economy.

With the financial markets largely taking a back seat, I’m going to focus on a few broader themes as well as a new dividend ETF in this week’s watchlist. Here are my four ETFs to keep an eye on in the coming week.

The news for retail has been nothing but bad for a while (except for Amazon (AMZN), of course, which continues to put traditional brick and mortar out of business). The news was especially bad this past week and, unfortunately, it will likely continue this week.

The Retail ETF was down about 3% this week and 4% for 2017 thus far. There doesn’t seem to be much reason to own this fund unless you’re betting on a long term turnaround or like trying to catch falling knives.

The high yield bond market has performed very well since credit spreads peaked in February of last year. Since then, the High Yield Bond ETF has returned over 27%, almost on pace with the 31% return of the S&P 500 during the same period.

But return chasers beware! The strengthening economy has been great for junk bonds but almost all of the easy gains are gone. Credit spreads have returned back to more normalized levels which means high yield investors should expect more normalized returns going forward. A strong economy is a good thing for junk bonds so I don’t think there’s a reason to bail right now but cautious investors may want to stick with shorter term bonds. The SPDR Bloomberg Barclays Short-Term High Yield Bond ETF (SJNK) is a great alternative with only a slightly lower yield but about one-third less risk. 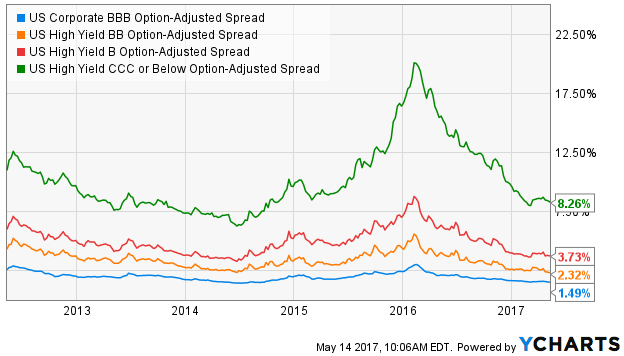 Greece has been a financial mess for the past several years and still sits on the brink of bankruptcy, but investors may be sensing a bottom. The Greece ETF is now up 23% year-to-date with almost all of that gain coming since the middle of April.

Germany’s finance minister said recently that a new bailout deal for Greece could be secured later in May. It’s not a done deal but investors are clearly optimistic as yields on Greek government debt have dipped to multi-year lows.

Dividend ETFs continue to be very popular so it’s not surprising that we see a new entrant into the fray. The Dividend Accelerator ETF attempts to differentiate itself by looking at companies that not only have a history of increasing dividends but are also forecast to have the highest probabilities of raising their dividends in the future.

This is only a minor difference from traditional dividend aristocrat funds that focus only on dividend histories. I don’t expect to see a real difference in performance compared to these funds but we’ll see if it catches on.

HACK Vs. CIBR: With Cybersecurity Stocks Rolling Again, Which ETF Is The Better Choice?