The emerging markets group has been one of the global market’s top performers in 2017, netting returns of more than 30%. For investors in this space, they couldn’t have come soon enough. 2013 through 2015 produced negative returns each year. 2016 finally marked a return to the green before 2017’s renaissance. It’s easy to look this year’s large gains and conclude that the biggest returns have already been had. In reality, the emerging markets group still looks relatively attractive despite this year’s run-up. Some pockets look very attractive, including large-cap dividend payers.

The huge performance difference between growth and value that we’ve seen in the U.S. this year also exists in the emerging markets. The MSCI Emerging Markets Value index is up 22% year-to-date, but the MSCI Emerging Markets Growth Index is up a whopping 47%! Dividend payers tend to more often fall into the value category, which helps explain why the group has lagged the broad emerging market indices as a whole.

Looking at the year-to-date performance of emerging markets, it’s the biggest dividend payers that have done the worst. 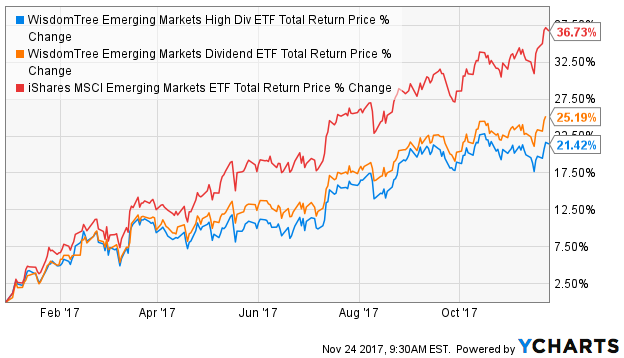 Investors were relentless in their abandonment of emerging markets stocks over the past few years as global economic weakness and concerns about the financial health of a number of governments pushed earnings growth into the red. Earnings growth has finally returned in 2017, which has brought investors back and pushed the big growth names to strong returns. The more mature large-cap names, by and large, haven’t been rewarded with the same multiple expansion and that presents an opportunity for investors.

We know that the S&P 500 is expensive by both historical standards and by comparison to other developed markets, but look at how expensive it is relative to emerging markets. 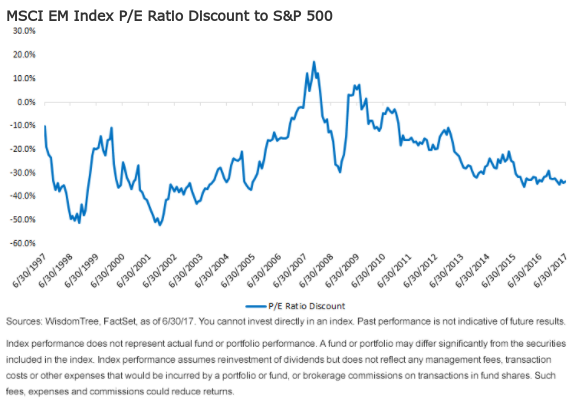 Even after 2017’s strong returns, emerging markets valuation levels are still 30% below that of the United States, a level not seen since before the financial crisis. On an absolute basis, the story looks even better. The Emerging Markets High Dividend ETF trades at a forward P/E ratio of just 9. It has a price/book ratio of 1.2 and a price/cash flow ratio of just under 6. The S&P 500, by comparison, has a forward P/E of 19, a price/book of 3.1 and price/cash flow of over 13. That, folks, is a serious bargain.

While most investors don’t usually look to emerging markets for dividend income, this ETF has a current post-expense yield of nearly 4%. Companies within certain foreign markets are known to distribute dividends very sporadically, and this fund is no different. In the recent past, quarterly distributions have been as high as over $1 per share and as little as $0.27 per share. Investors won’t want to turn to this fund for regular income, but its trailing 12-month dividend yield has been consistently north of 3%. That’s a nice return for investors as they ride out some of the riskiness that these markets often experience.

2017 has been a great year for emerging markets investors, but the current rally might not be over yet. Research from WisdomTree indicates that when the valuation gap between emerging markets and the S&P 500 is as large as it currently is, emerging markets tend to strongly outperform over the following five-year period. With earnings growth finally providing a lift to the group once again, large-cap dividend payers from the emerging markets nations are looking like a particularly attractive play heading into 2018.