It’s not unusual for a particular segment to have a hot streak, but what’s been happening in the micro-cap space is remarkable by almost any standard.

Consider the chart below for the iShares Micro-Cap ETF (IWC) and take a look at that uptrend. 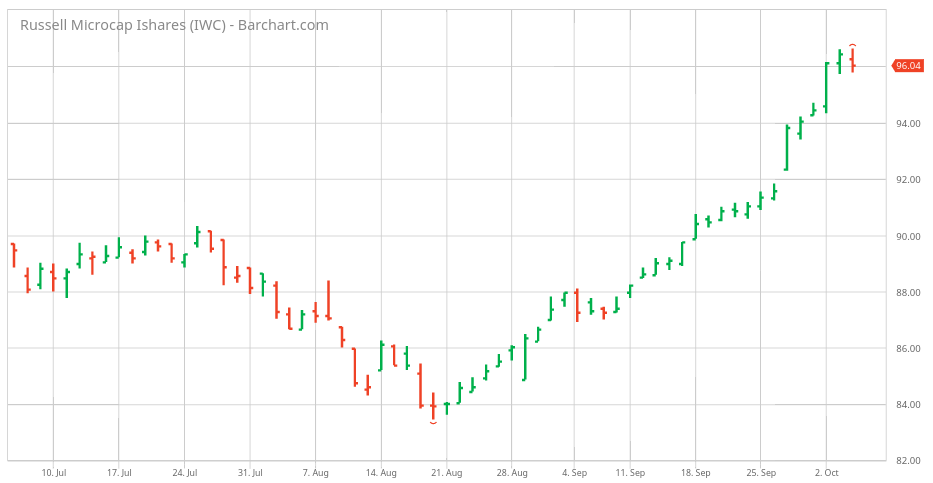 The Micro-Cap ETF was up on 29 out of the last 31 trading days prior to posting a down day on Wednesday. The fund actually had a negative year-to-date return as recently as August 24th, so it’s not like investors were beating down the doors to load up on ultra-small companies prior to then. Why have micro-caps suddenly become the most popular area of the market?

We can probably look to Washington for the answer. After the initial shock of Donald Trump’s victory in November wore off, the markets started rising as they digested the possibilities of his pro-business, pro-growth agenda. Small-caps in particular were big winners in the days immediately following the election since they would be the ones that would enjoy the biggest and swiftest benefits.

By December, the Micro-Cap ETF was up nearly 20% from where it was on election night before flatlining for much of the next three quarters. Trump’s tax reform plan, which involves lower corporate tax rates and other incentives for small businesses, was pushed to the backburner as Republicans focused on healthcare. Now that tax reform has moved back to the top of the agenda and we’re starting to incrementally get more detail around how the plan will look, investors may be realizing once again how small companies could stand to benefit.

What else could be fueling this incredible run? We can start by looking at the composition of the fund. It has about half of its assets in financials and healthcare stocks. Five of the fund’s top 8 holdings are in the biotech space. You can see by looking at the returns of the Financial Select Sector SPDR ETF (XLF) and the iShares Nasdaq Biotechnology ETF (IBB) that biotech helped fuel the first half of the run and financials powered the second half. 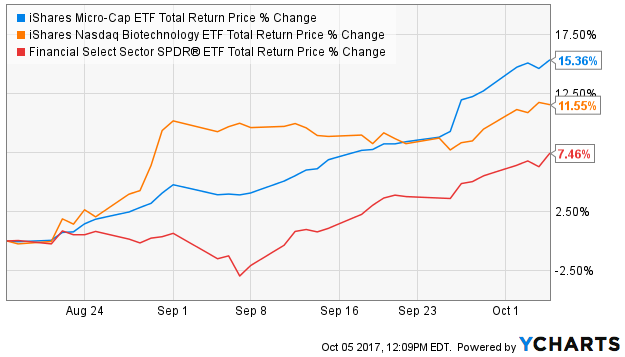 Another contributing factor could be the portfolio’s fundamentals. Despite the reputation of micro-caps as highly risky investments, this segment of the market is actually quite a bargain right now.

That’s the Micro-Cap ETF on the left and the S&P 500 on the right. Micro-caps would be considered undervalued looking the forward P/E ratio, but they look significantly undervalued looking at most other valuation metrics. We haven’t seen much of a preference for value stocks for some time, but many investors still like a good bargain. 2017 will be known as the year that investors made money no matter where they invested, but eventually we’re going to return to more of a stock picker’s environment. Value stocks provide some nice downside protection in case the market turns.

Still, the “29 up days out of 31” streak is very unusual. The micro-cap rally looks very overdone in the short-term, so this is probably not an ideal entry point. It’s a good reminder though that the markets and what’s consider in favor at the moment can turn on a dime.

JNK: The ETF That Junk Bond Investors Should Be Investing In