The markets reminded us on Wednesday how even the calmest environment can turn volatile quickly. The markets started losing faith that events in Washington would come to a non-eventful conclusion and began dumping risky assets en masse. By the time all was said and done, the Dow dropped over 370 points and the Nasdaq shed almost 160, their worst single day performances this year. The CBOE Volatility Index, which had been hovering around 10, shot all the way up to 16 on Thursday.

The news wasn’t all bad though. Low volatility ETFs, the funds that look to fill out their portfolios with stocks that have historically been less risky than the broader market, held up pretty well. While the S&P 500 and Nasdaq were posting losses of around 2% on Wednesday, several of the largest low volatility ETFs posted losses of only around 0.5%. 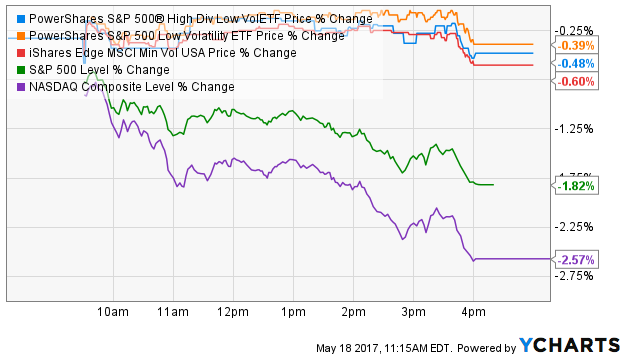 The 6-year old iShares Edge MSCI Minimum Volatility USA ETF (USMV) is one of the largest and longest tenured low volatility funds in the marketplace with assets of just over $12 billion. It may also be one of the most successful at achieving its objective.

USMV above all else is designed to try to be less volatile than the broader market overall. While low volatility funds have been getting kicked around a little post-election, they’ve historically done very well in accomplishing its goal. The beta of this fund is currently around 0.75, roughly in line with its long-term average. The standard deviation of historical daily price returns tells a similar story and has the fund around 15% less volatile than the S&P 500.

Low volatility funds, such as USMV, also try to limit losses in a down market. The downside capture ratio does a good job of telling how a fund has performed in these environments. Low volatility ETFs have had some trouble over the past year but the longer-term data suggests the fund has done very well in protecting investors from oversized losses.

Not surprisingly, the fund tends to underperform in stronger bull markets in which growth stocks generally outperform. The fund’s ability (historically at least) to limit its losses to just half of those of the overall market is exactly the type of behavior that can make this fund ideal to round out a broader portfolio or act as a core portfolio holding.

The fund has struggled to keep up with the S&P 500 over the past year. I think that's partially a reflection of the post-election rally in pro-growth sectors and the outperformance of tech stocks lately. Those areas aren't traditionally overweighted in these types of funds and is probably why they're being left behind right now. Since the fund’s inception in 2011, USMV has nearly matched the total return of the S&P 500 while doing so with 15-20% less risk.

The market’s extended streak of remarkable calm has put low volatility ETFs on the back burner a bit, but Wednesday’s pullback is a reminder why investors should always be cognizant of the benefits of overall portfolio risk management.

SPHD: It May Be Down, But It’s Far From Out