The biotech sector has gotten a lot of attention lately both in the financial markets and in Washington. The sector, which was one of the worst performing areas of the market in 2016 posting a loss of more than 20%, has started posting gains again and is looking like the rally may be poised to continue. The biggest play in the sector, the iShares Nasdaq Biotechnology ETF (IBB), is up more than 10% on the year (its smaller equal weight counterpart, the SPDR S&P Biotech ETF (XBI), is up over 17%).

The sector has alternatively gotten good and bad news from the White House. For many months, there has been talk of lowering drug prices through open competition or price caps putting pressure on the big drug manufacturers. On the other hand, President Trump spoke recently of his desire to reform the entire drug approval process in order to “speed the approval of life-saving medications” and “cutting the red tape at the FDA”. That notion was welcomed by the equity markets even though it received a tepid response from big pharma companies.

One thing working in favor of biotech right now is M&A and the big prize could be Bristol-Myers Squibb (BMY). A StreetInsider article from this week called the company “in play” and listed Roche (RHHBY), Novartis (NVS), Gilead (GILD) and Pfizer (PFE) all as potential buyers. Acadia Pharmaceuticals (ACAD) could also be up for grabs with Biogen (BIBB) rumored to be a possible bidder. In its quarterly analyst meeting, Amgen’s (AMGN) CEO Bob Bradway discussed how his company was going to be on the lookout for acquisitions both big and small.

Even Gilead, the big biotech that just caught Wall Street off guard when it significantly lowered 2017 revenue guidance due to weak sales in its hepatitis C drugs, even provided some reason for optimism. The stock dropped roughly 10% on its weak forecast, from a pre-earnings level of around $73 down to a post-announcement low in the $65 area. Since then, however, it has, somewhat surprisingly, begun rallying anew. The stock closed Friday at $70, gaining back nearly ⅔ of what was lost. Does this signal something of a capitulation point and indicate that buyers are ready to return?

From a technical standpoint, the fund just broke out to the upside from a wedge pattern that has been forming over the past several months.

I wrote earlier this month that I felt the Biotech ETF could close out February above $300 if it could break through the resistance level around $285. It has and now it feels like that $300 level is well within reach.

Despite its rally so far this year, the fund is still about 13% off of its 2016 highs and 26% off of its all-time highs. Valuations in the sector look very reasonable right now as well. Thomson Reuters estimates put the forward P/E of the sector at less than 13, a level it hasn’t seen in several years. 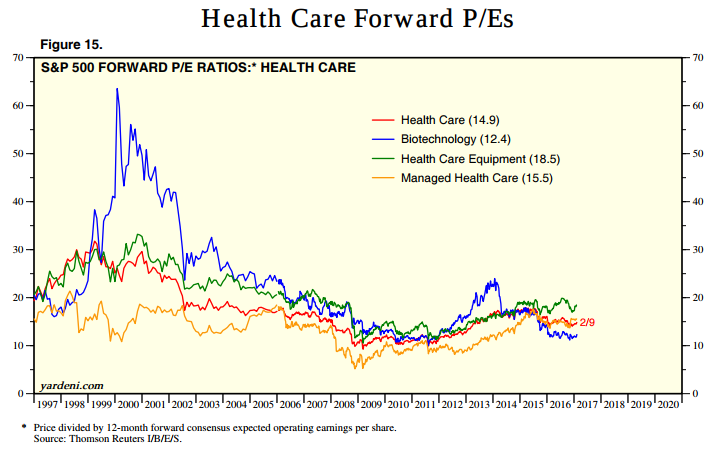 Gilead’s results notwithstanding, the Q4 earnings season has been pretty good for biotech. Big players such as Amgen, Celgene (CELG), Illumina (ILMN) and Vertex Pharmaceuticals (VRTX) - all top 10 holdings in the fund - popped strongly after announcing earnings. If the sector can continue posting generally good revenue and earnings results and get a little help from the White House along the way, this could be a nice spot to add a few shares.

Your S&P 500 Index Fund Should Be A Mutual Fund, Not An ETF